Turn the lights lower and save $$$$ and eyes! End migraines 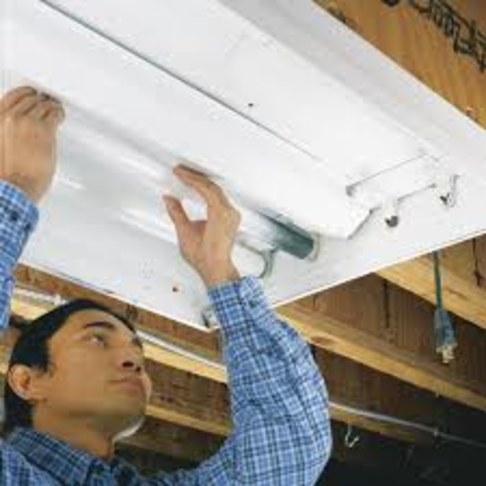 What problem does it solve? Most workers use a computer monitor which works best with lower ceiling lighting. Taking half the fluorescent lights out of the ceiling would ease that bright light which is wasted energy. What is your solution and who does it apply to? Remove half the ceiling light bulbs and help all workers who use computer monitors to save their eyes. What is the anticipated impact? Electric costs get cut in half and we can use that money to fund the pension.

Migraine Headaches If you are prone to migraine headaches, you might want to examine the type of lightbulbs you use in your home or workplace. A 2008 article in the U.K. newspaper "The Daily Mail" suggests that some people who use fluorescent lighting might see an increase in their migraines.

In my office many supervisors keep their individual private office lights off and use a desk lamp. Everyone is the main office/cubicle areas has to have glaring lights on all the time.

I completely support this idea. The lights over my desk are way too bright so having the lower lighting would be most helpful. As well, motion sensor light switches (set at 15-20 mins) in all the restrooms and conference rooms would help save a lot of $$ as well.

Just remove two of the 3 bulbs in each fixture to reduce costs and health risks!

This idea can be immediately implemented with NO COST in every office!

Old saying light is enemy of eyes. LED lights are having rays like sunlight, penetrates in your eyes and harms. Blue light-LED, Monitor, TV and cell phone will create high demand for eye doctors and eye medicine. We need to act on source of problem.

State of NJ- Department of the Treasury - DPM&C - As of July 2012, the State has 291 leases in New Jersey comprising approximately 7.6 million sq. ft. of office space and approximately 1.9 million sq. ft. for other State uses. The State leases property statewide and, in some cases, nationwide. Can you imagine how much money would be saved just taking out half the light bulbs? And this data is 7 years old!

TBI can also cause a person to feel ill when exposed to fluorescent lighting, according to the International Brain Injury Association. Fluorescent light-induced symptoms can include headache, fatigue, dizziness, nausea, eye strain, eye fatigue, and increased sensitivity to visual input. Mar 27, 2017

Some solutions include: Use burned out light bulbs: If whoever is in charge of maintenance has a problem with leaving a fixture empty, suggest that they simply replace the tubes in your work area with burned out tubes. Use a small desk lamp: Instead of using fluorescent lighting, use a desktop lamp for working on your computer or on papers. In fact, a desktop light is better for working in a small area.

This means even moderately bright light can trigger reactions in the eye and brain, thus bringing on symptoms of their condition. Other studies have shown that the color of light also matters. ... Experts have acknowledged that fluorescent lights can make a person feel dizzy due to their inherent flicker rate. Dec 5, 2017

There are a number of negative health effects that have been linked to working under fluorescent lights that are theorized to be caused by this body chemistry mechanism such as: Migraines Eye strain Problems sleeping, due to melatonin suppression Symptoms of Seasonal Affective Disorder or depression Endocrine disruption and poor immune systems Female hormonal/menstrual cycle disruption Increases in breast cancer rates and tumor formation Stress/Anxiety, due to cortisol

There are a number of negative health effects that have been linked to working under fluorescent lights such as: Migraines Eye strain Problems sleeping, due to melatonin suppression Symptoms of Seasonal Affective Disorder or depression Endocrine disruption and poor immune systems Female hormonal/menstrual cycle disruption Increases in breast cancer rates and tumor formation Stress/Anxiety, due to cortisol